Ribs are considered flat bones and contain red bone marrow.  There are three types of ribs:  true, false, and floating.  True, or vertebrocostal, ribs are the uppermost seven ribs.  True ribs connect to the sternum via their own costal cartilage.  False, or vertebrochondral, ribs are the 8th, 9th, and 10th ribs.  Rather than the direct connection to the sternum that the true ribs have, the connection of the false ribs to the sternum is considered to be indirect.  False ribs connect to the sternum by connecting to the costal cartilage of the ribs above them.  Floating, also called vertebral or free, ribs are the 11th and 12th ribs with the 10th ribs sometimes included as well.  Floating ribs are considered to be floating because they do not connect with the sternum at all and instead end in abdominal musculature.

In addition to being classified as true, false, or floating ribs, they can also be classified as typical or atypical ribs.  Typical ribs are the 3rd - 9th ribs and have certain features.  Typical ribs have a head with two facets that are separated by the crest of the head.  Typical ribs articulate with a thoracic vertebra of the same number by way of one facet and with the second facet they also articulate with the superior vertebra.  Typical ribs also have a tubercle that is found at the junction of the neck and body of the rib which articulates with the transverse process of the corresponding vertebrae.  Lastly, the body of a typical rib is curved most at the costal angle.  Atypical ribs do not have such features and include the remaining ribs:  1st, 2nd, 10th, 11th, 12th. Movements of the thoracic wall generated by the actions of several muscles working together are responsible for respiration.  Muscles such as the intercostals, transversus thoracis, subcostals, scalenes, and the diaphragm have important roles in respiration.  These muscles work together to expand or compress the volume of the thoracic cavity by elevating and compressing the ribs, respectively.  There is a difference in the muscles involved in inspiration and expiration depending on whether it is passive or active.  During passive inspiration the primary muscles of inspiration are working, and these muscles are the diaphragm and the external intercostals.  During passive expiration, the elastic recoil due to the relaxation of the diaphragm and of the internal intercostals compresses the throacic cavity.  On the other hand, during active respiration more movement of the rib cage is necessary, so more muscles are involved.  During active inspiration the primary and secondary muscles are involved with the secondary being the sternocleidomastoid, scalenes, pectoralis major, pectoralis minor, serratus anterior, serratus posterior superior, and the upper iliocostalis.  Active expiration involves the recoil along with the abdominals, lower iliocostalis, lower longissimus, and the serratus posterior inferior.  The levatores costarum muscles are interesting in that they elevate the ribs, but it is not known whether or not they actually play a part in inspiration. 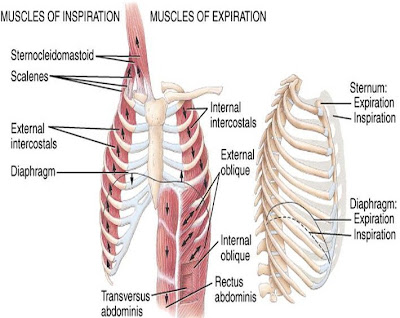 Pneumothorax is a somewhat common thoracic problem.  This occurs most often due to an injury, rib fracture, or following surgery and allows air to enter the pleural cavity, causing the lung to collapse.  If the pneumothorax is minor enough it may heal on its own, however, a needle is usually used to extract air from around the lung so that the lung will have better expansion. The needle is inserted into the 2nd intercostal space in the midclavicular line and into the pleural space.  The needle is inserted over the top of the 3rd rib to avoid the intercostal vessels and nerves.  For a larger pneumothorax a chest tube is required to extract the air.  The chest tube is inserted behind the pectoralis major in the mid-axillary line so that the thick muscle will not have to be dissected.  While keeping in mind that the diaphragm rises to the level of the 5th intercostal space during expiration, the highest intercostal space that can be felt is used for insertion of the chest tube.  Exact placement of the tube depends on the cause of the pneumothorax. 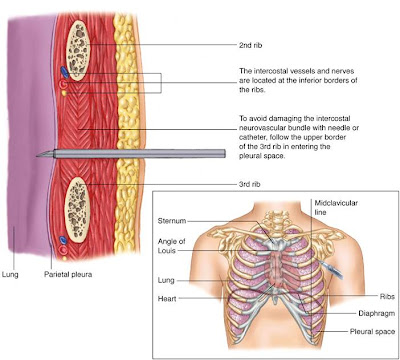 I would like to touch on a few general topics relating to my specialty dissection of the hand.

The hand is considered to be the manual region of the upper limb distal to the forearm.  Twenty-seven bones constitute the hand and wrist and are considered as carpals, metacarpals, and phalanges.  There are eight carpal bones which are arranged in a proximal row and a distal row.  The proximal row includes the scaphoid, lunate, triquetrum, and pisiform bones while the distal rowincludes the trapezium, trapezoid, capitate, and hamate bones.  The distal row of the carpal bones articulate distally with the proximal surfaces of the metacarpals, also called the bases of the metacarpals.  There are five metacarpals, corresponding to digit 1 to digit 5, and articulating distally with the proximal phalanges, creating the knuckles of the hand.  There are fourteen phalanges total, which include the proximal, middle, and distal phalanges of digit 2 through digit 5.  Digit 1, the pollex, is made up of two phalanges, a proximal phalanx and a distal phalanx, rather than three.  These bones of the wrist and hand serve as anatomical landmarks as well as attachment points for the muscles that move the hand.

The thenar and hypothenar compartments are two of the more easily found landmarks of the surface anatomy of the hand.  The thenar eminence serves as a way to identify the location of the superficial and deep palmar arches.  The superficial palmar arch is found in the center of the palm,  terminating on the thenar eminence, and the deep palmar arch is located about 1cm more proximal than the superficial palmar arch.  Another anatomical landmark on the hand is the knuckle formed between the head of the metacarpal and the proximal phalanx.  The knuckles are important landmarks when finger amputations are performed.  While the aforementioned landmarks were not discussed in class for various reasons, the anatomical snuff box was an area that was heavily discussed.  The anatomical snuff box is an area which is medially bordered by the tendon of the extensor pollicis longus, and laterally bordered by the tendons of the extensor pollicis brevis and the tendon of the abductor pollicis longus.  This is an area used to palpate the scaphoid bone when it is thought to have possibly been fractured following a fall that was caught by bracing one's self with the hand.